Jewellery Exporters' Association of Turkey (JTR) is a non-profit trade association. JTR was founded in 2003 and has more than 1100 members.

JTR is a fundamental organization that fosters precious metals and jewellery exports, prompts exporters to reach more markets abroad and to secure a greater share in these markets.

Main Goals of the Association are as follows;

Following the end of Bronze Age and between 2000-1200 B.C., together with the commercial life developed by means of Assyrians, the antiquity craftsmen of Anatolia combined what they learnt from their contact with Mesopotamia culture with their own values.

Due to Hittites and many other civilizations which lived in the central and western Anatolia in subsequent years, jewellery made by using precious metals and gems created an environment to develop jewellery techniques. Craftsmen who lived back then in Western Anatolia, which was also a commercial center in the world, created an "Oriental” synthesis by combining their western lands with the east they observed.

ARTEMISIA IS AN IMPORTANT ELEMENT THAT SHAPED THE JEWELLERY TRADITION OF THE ERA...

In the upcoming ages bee, crescent and hawk motifs, which are identified with Goddess Artemisia and remind the fact that Artemisia is protector of universality-civilization-ruler of nature-,were seen on jewellery found in Ephesus Artemisia Temple and Usak. Artemisia was the main goddess of Anatolia and one of the most important elements that shaped the jewellery tradition of the era.

Regarding jewellery making in Hellenistic era, we see that art of jewellery reached its summit. Jewellery craftsmen of Hellenistic era who got to know precious colorful gems such as emerald, ruby, amethyst, garnet and agate started to use them in jewellery making. In addition to jewellery pieces with Hercules figures, depictions of animal heads were also frequently seen on jewellery.

Following the Hellenistic era, of the era of the Romans began in the field of jewellery. Reflecting their original techniques to jewellery making, the Romans started to use of pearl in jewellery and created beautiful designs with a combination of gold and precious gems.

Byzantine jewellery influenced jewellery making in both the West and Seljuks and Ottomans who lived in Anatolia. Jewellery making developed in this era since they combined the traditions of Roman and Hellenistic era with Christianity. It became an important reference for the movements which would come after the Byzantines.

ART OF JEWELLERY WAS DEVELOPED IN ANATOLIA...

Art of jewellery, which continued its development in Anatolia under the influence of several different cultures, gained a structure where geometric forms were dominated by the style introduced by the Turkmen along with the Seljuk following the Byzantine. During Seljuk era, jewellery making was concentrated in Konya and Alaiye and, due to influence of Islam; gold jewellery became the accessories of women alone.

With culture of gifting developed in this era, number of objects produced using precious metals increased.

The Ottomans inherited a jewellery tradition which came from their soils on which numerous civilizations lived and was shaped through thousands of years. While reflecting cultural wealth they had over the vast lands of their country, they made the art of jewellery reach the top. Importance of jewellery increased pro rata to strength and expansion of borders of the Ottoman Empire. Masters processing precious gems in the other cities outside Istanbul, the capital of the empire, used the natural gems in their most natural form. As the most important feature of Ottoman Jewellery, they adapted jewellery to the shape of the gem, not the gem, not the gem to jewellery. Forms composed of natural items such as crescent and star and flower, which were the classic Ottoman motifs, were predominantly used in the jewellery. Although Ottoman jewellery making culture reflects Oriental style on jewellery with its expanding borders over time, influence of Western style came to surface with the onset of the 18h century. Simple motifs such as ship, bow, and badge were replaced by motifs which represented wealth and splendor.

Chain, watch, watch chain, seal, decoration, anklet, needle, wreath, hairpin and necklace were among the pieces frequently used in the Ottoman jewellery. During Ottoman era, precious gems were used not only in the jewellery but also on personal belongings used in daily life such as sword, dagger, envelope, box, chest, writing set etc, which signified the power of the Empire on such goods in a sense.

Jewellery of the Ottoman era had a diversity reflecting pluralist structure of the empire. Armenian masters and other masters from the Balkans and Iran who accompanied the Turkish masters demonstrated techniques such as inlaying, engraving, filigree, niello work, wickerwork and nailing. Thanks to harmony created by contrast colors used on different pieces and style, Ottoman jewellery making gained its peculiar style.

Turkish Jewellery making, which shaped the heritage of thousands of years inherited following the Ottoman Empire, is shaped on such a splendid tradition and carries the traces of different cultures through the experience of thousand years.

Through the liberalization initiated in Turkish economy in 1980's, the Turkish gold sector experienced a process of breakthrough and the decisions about a structural change taken on January 24, 1980 for the implementation of the policies of transition to free market in all fields of economy represented a significant stage in terms of the development of the gold sector as well. Gold importation was liberalized provided that the conditions specified with the decisions taken in 1983 and 1984 are observed. Based on the same decisions, Central Bank of the Republic of Turkey was authorized to determine the value of gold and foreign exchange rates against Turkish Lira.

IN 1990s GOLD SECTOR WAS RESTRUCTURED...

In 1993, gold importation and exportation was liberalized based on the determination of the price of gold. Through the decisions made concerning the liberalization of gold, difficulties in the import and export processes were removed. As a result of these developments concerning gold the rapid growth experienced in the sector accelerated the new decisions about gold which has great potential in terms of economy. The new decisions aimed to restructure the gold sector.

The most significant development in this restructuring process was the opening of Istanbul Gold Exchange in 1995, where gold is traded in an organized market. Istanbul Gold Exchange has been an important stage in the participation of gold in the financial system, in the development of the instruments of investments based on gold and its expansion to an international dimension. Through Istanbul Gold Exchange, gold prices have been parallel to the gold prices in the world, the rule that the imported gold shall be of acceptable purity and standards was introduced and as gold trade has been brought under control, the system has attained a transparent structure.

Turkish Jewellery Industry, which continues to grow with a stable and constant development, has become one of the prominent countries in the gold and jewellery market around the globe with momentum gained in the recent years. Turkey is among the top 5 countries in terms of world's gold jewellery production.

Gold and jewellery production center is Istanbul. Also, Ankara and Izmir as well as some cities in Eastern and South Eastern Anatolia are gold jewellery manufacturers. Turkish jewellery industry has a capacity of 400 tons of gold and 200 tons of silver processing and turning into jewellery per annum. Following Gold Exchange established in Istanbul in 1995, Istanbul Gold Refinery was started in February 2002.

Precious metal and jewellery industry, which is among the largest ones of the Turkish production industries, employs around 250.000 people. Currently, more than 50 companies employing 200 to 1500 qualified employees run their operations within the industry. Workshops in Ankara, Istanbul and Izmir work on simple gem cutting, forming and chipping and some small scale companies of the precious and semi-precious gems and metals market engage with production.

Turkey presents the east-west synthesis which is unprecedented in any other industry. Also, apart from having a strong jewellery market, Turkey is an important economic center of jewellery design and production thanks to its geographical proximity to several countries.

In order to get to know Turkish Jewellery Industry and keep peace with its development, it is vital to remember and understand historical, geographical and cultural accumulations which have brought the industry to its current position.

TODAY - PROGRESS IN EXPORT DURING YEARS 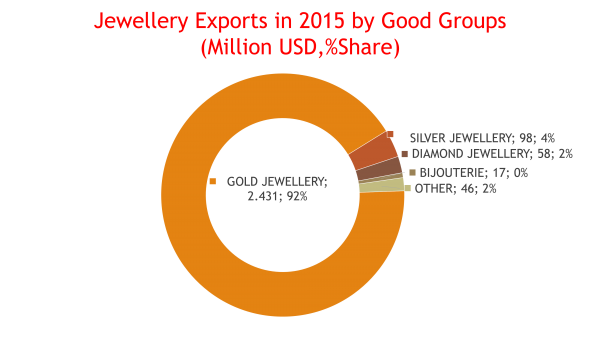 OUR ADVANTAGES MAKE US STRONGER…

Turkish jewellery has an advantage of "6 Golden Standards”;

The Turkish art and craft of jewellery making is the outcome of a unique heritage since 3000 B.C which has been passed on from Hittites to Trojans, Urartu, Greeks, Romans, Seljuks and Ottomans. Such a valuable heritage, when combined with latest technology, outstanding craftsmanship and competitive prices, has placed Turkey in an enviable position ready to meet any demands of international clients with perfection.

Let Turkey be your first preference in jewellery and you too can benefit from our experience!

Today major Turkish jewellery manufacturers create and produce 10 new models, each with 10 variations everyday. An outstanding performance that is very hard to beat! The jewellery sector in Turkey has the capacity to meet any demands of its international clients and to offer a dazzling array of choices with perfection.

Let Turkey be your first preference in jewellery and enjoy the privilege of endless choice!

Turkey has been a tremendous growth in the jewellery sector and is today working with the world's largest design teams. With our immense capacity, we are able to create and produce any model, any design, any amount with perfect craftsmanship and supreme quality.

Let Turkey be your first preference in jewellery and you too can make your customer's wish a reality.

Turkey today is well-known in the international jewellery market not only for its innovative designs and supreme craftsmanship but also for its unparalleled quality. On top of the computerized workshops, hand crafting techniques such as Midyat, niello (savat), wickerwork (hasır) and filigree (telkari) are unique skills which crown the Turkish jewellery with the same impeccable finishing quality.

Let Turkey be your first preference in jewellery and you too can benefit from its excellent quality!

During the last decade, Turkey has succeeded to become the world's 2nd biggest jewellery exporter. Today, we already enjoy the privilege of meeting the demands of 300 million happy customers all over the world by offering the excellent with unbeatable prices.

Let Turkey be your first preference in jewellery and you too can benefit from unmatched business opportunities and make your customer happy!

Turkey, in recent years, has taken giant steps in the jewellery sector and invested in the best machinery in the world. Today, we have the capacity to meet any demands with a fast turnaround and perfect quality.

Let Turkey be your first preference in jewellery and you too can benefit from our advantages.

We have organized national participation to:

We have organized buying missions to:

WE SUPPORT JEWELLERY DESIGN BY A NATIONAL COMPETITION…

The theme of Jewellery Design Competition in 2016 was determined as "Journey to Peace”.

The finalists of the contest are as below, we present appreciation and congrats to the valuable designers once more